In early 1965, Fr. Maurice Ouellet, of the Edmundite Congregation of Saint Elizabeth, in Selma (Alabama), heard a knock at his door. When he opened it, he saw before him none other than … Martin Luther King! The pastor said: “The blacks told me that there is a white man in Selma who is black, and I want to meet him”. King was in the midst of the historic campaign for blacks to have the right to vote. Father Ouellet was the first white citizen of Selma to openly support the campaign. As a result, he received several threatening phone calls, including threats against his life. 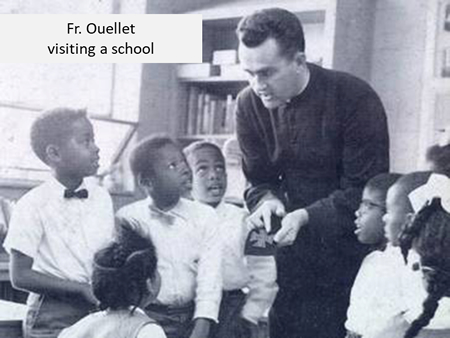 On March 7, 1965, the police brutally attacked peaceful demonstrators, preventing them from marching from Selma to the state capital, Montgomery. Seventeen blacks were hospitalized, and a woman was beaten almost to death. The episode became known as “Bloody Sunday”.

Fr. Ouellet ran to the Bom Samaritano Hospital and helped doctors and nurses to assist the victims. In response to the attack, Luther King called several US religious leaders, asking them to join him on Selma’s next march to Montgomery. In Chicago, Mathew Ahmann, a Catholic  layman and director of the National Catholic Conference for Interracial Justice, took action to form the Catholic group.  To the priests, Ahmann said: “Put on your clerical dress. If you don’t use it anymore, look under your bed ”.

At that time, many priests had already abandoned the use of the clerical cassock or shirt. But, for the Catholic presence to be distinct and representative in the protest, the strength of this symbol was indispensable. Look at this crazy thing: indirectly, a Baptist pastor was responsible for making Catholic priests dress like priests! And the name of that pastor, in Portuguese version, was “King Martin Luther”. Ah, nothing like history and its ironies… 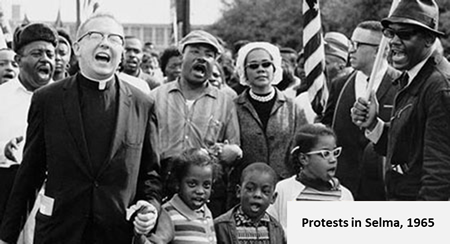 More than 900 Catholic priests, nuns and lay people responded to the call – making up almost a third of all protesters! Delegations came from all regions of the country. In New York City alone, 32 priests and seven lay people were present, with ten more priests from Brooklyn. The protests followed for ten days, awaiting government authorization to march to the capital. The nuns were among the most excited! Atlanta journalist Ralph McGill was thrilled to see them at the front of the protest, and reported: “The presence of Roman Catholics … inspired the committee and shamed the timid.” 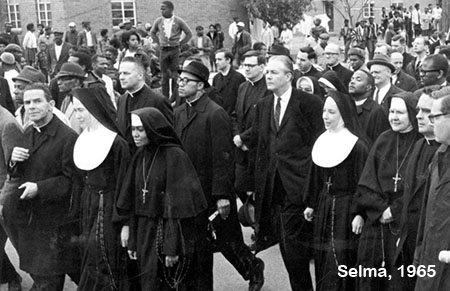 The crowd was all packed in front of the TVs, when President Lyndon Johnson declared that he would send the voting rights bill to Congress. Screams, tears, clapping, singing and praise exploded among the protesters! On March 17, 1965, a federal judge authorized the march to Montgomery. About 3,000 protesters left Selma, one of whom deserves a special quote: Jim Letherer, an activist with the Michigan Catholic Interracial Council. He walked about 86 kilometers on crutches, with one leg! Isn’t it beautiful? 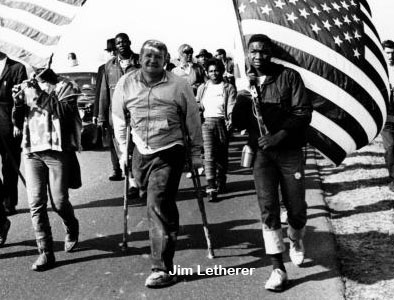 Unfortunately, Archbishop of Mobile, Thomas Toolen, was against Catholics’ involvement in Selma’s demonstrations, and sent Father Ouellet away from the city. Saint Elizabeth parishioners appealed to the bishop, but he upheld the decision. On June 27, 1965, Fr. Maurice Ouellet said goodbye to the people of Selma. Humble and wise, he advised his congregation to remain faithful to the bishop and to avoid anger: “Everything we do, we must do with love. As a person and individual, I matter very little. However, the Church matters, and we need to be in agreement. ”

And speaking of an agreement … All this history shows that Catholics and Protestants can come together around common causes. Pro-life activities, fight against gender ideology in schools, actions to help the poor, etc. It is what Pope Francis calls “the culture of the encounter”.

It is hasty and, perhaps, very unfair to judge Archbishop Toolen as a villain. He was always a man dedicated to the cause of racial equality and, in that sense, helped the black community to achieve many advances. Toolen opened several churches, orphanages, hospitals and other institutions aimed exclusively at blacks, to the point that racists called him “the black bishop”. In 1950, he oversaw the construction of the Saint Martin de Porres Hospital, which was the first hospital in Alabama where black and white doctors could work side by side. He also convinced a hospital to become the first in Alabama to assist black pregnant women. In 1964, Toolen ended racial segregation in Catholic schools in the diocese.

So what led him to oppose the participation of Catholics in demonstrations for Civil Rights? Well, from his letters, we can see that he feared that the priests of the Edmundite Congregation would be murdered. One must also consider his age: as an older man, he was deeply attached to the idea of obedience to the authorities – and Selma’s protests were not allowed by law.