“It is not fair to eat the meat of the poor animals, when we can eat very well just from vegetables!”, The taxi driver told me. Despite disagreeing, I decided not to upset the man. After all, there is no harm – morally speaking – to being a vegetarian. I went into “yeah, you’re right” mode and patiently endured the sermon until the end of the ride.

However, when this speech begins to reverberate among members of the Church dressed as Christian virtue, it is no longer possible for us to remain silent. Let us see, therefore, what the Church says about this.

WHAT DO THE MAGISTERIUM AND THE BIBLE SAY?

The Catechism of the Catholic Church (2415 to 2418) teaches us that animals are gifts from God. They are blessed creatures, but they have no immortal soul – only a sensitive soul. Thus, we can use them for different purposes, including for our food.

We have an obligation to treat them with respect, as far as possible, as they have feelings and feel pain. It is a sin “to make animals suffer uselessly and waste their lives”.

In the Old Testament (Lev 11), the foods allowed to the Hebrew people are described: it was lawful to eat various types of animal meat, except those considered “impure”, such as pig, bat, shrimp, birds of prey and reptiles, among others (so as not to lose focus, we will not dwell on discussing the reason for these restrictions here).

According to the Torah Laws that the Israelites follow today, Moses determined that the slaughter of animals must be done in a special way, so that the animal dies instantly, without suffering. Currently, the process is carried out by a trained person, the shochet, under the strict supervision of a rabbi. Only properly slaughtered animals – considered kosher – are approved for Jewish consumption (in the photo below: shochet slaughtering a bird according to the Laws of the Torah). 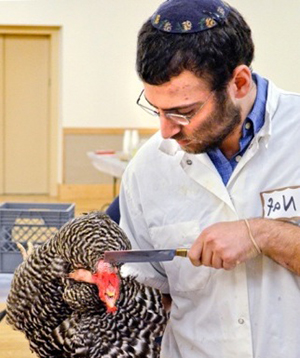 Early Christians, especially those of Jewish origin, strictly followed these dietary precepts. Everything changed on the day that Saint Peter had a supernatural vision: God showed him that the faithful could now eat any animal that they wanted:

“… He saw the sky open and something like a large towel coming down from heaven to earth (…) descended. It contained all the quadrupeds, the reptiles of the earth and the birds of the sky. A voice spoke to him. : Get up, Pedro! Kill and eat. Peter said: Not at all, Lord, because I never ate anything profane and impure. This voice spoke to him a second time: What God has purified, do not call yourself impure. ” (Acts 11: 11-15)

Now, brothers, sharpen your canines … Here goes one of the most carnivorous verses in the Bible. Speak, St. Paul!

“Eat everything that is sold in the butcher shop, without asking anything for reasons of conscience.” (I Cor 10,25)

FAIR REASONS TO BE VEGETARIAN

We will not discuss here whether being a vegetarian is healthy or not; we approach the issue from a moral and religious point of view, and leave the rest to doctors and nutritionists.

So beware: neither the Bible, nor the Church’s Tradition nor the lives of the saints offer any basis for Catholics to believe that killing animals to eat is evil. Anyone who thinks like that, generally, let themselves be influenced by Hinduism, by spiritism or by crude New Age philosophies.

On the other hand, it is perfectly legitimate for a Catholic to completely refrain from eating meat because:

The most common argument that vegetarian activists use is that, from the point of view of animals, carnivorous people are murderers.

The most bizarre is that most of these animal lovers activists do not regard human baby abortion as murder. It makes you wonder: “Did you give up the top sirloin to eat poo, my son?”.

More radical than vegetarians are vegans. They condemn “animal exploitation” not only as food, but also as a raw material for various products, such as leather, wool, silk and cosmetics. Holy, naivete, Batman!

Vegan friend, as a member of an industrialized society, know that practically everything you use was produced by killing animals, albeit indirectly. Not even the upholstery of your ugly “ecological leather” sofa escapes this reality.

Unless you are Tarzan or Jane, almost everything around you contains metal or was produced by metal machines. And this metal comes from mining companies, which need to deforest and turn over large tracts of soil with excavators to extract the ore. In the process, no matter how much care is taken, it is impossible for many animals not to die.

So, dear vegans, your clothes, your house, your bicycle, your chewing gum, the packaging of your soy milk, the toilet paper that cleans your butts … All of that is stained with animal blood.

WERE JESUS ​​AND ST. FRANCIS VEGETARIAN?

You may have heard someone say that Jesus was a vegetarian. Anyone who believes in this delusional theory forgets a simple fact: this kind of fuss was INADMISSIBLE for a Jew at that time. 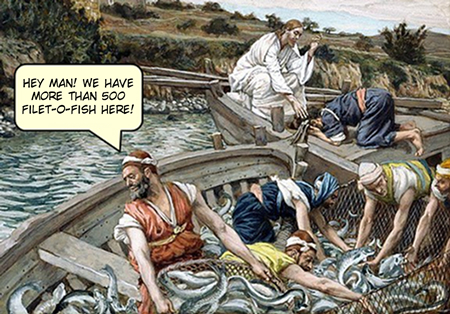 Eating meat was an integral and indispensable part of some central rites for the people of Israel, such as Easter. And, to be very clear: who established these rituals was God himself, through Moses.

You have to be very deluded to believe that Jesus and his Apostles did not consume animal meat. After all, the Gospel is full of passages that make this hypothesis indefensible:

The “Hindu Catholics” have no consolation to say that Jesus approved only the consumption of fish. He was in favor of eating red meat too! This is what is clear in the parable of the prodigal son: when the youngest son returns home, his father orders a calf to be put on the spit (Lk 15, 22-23).

If Jesus were really a vegetarian, the parable would be somewhat different … 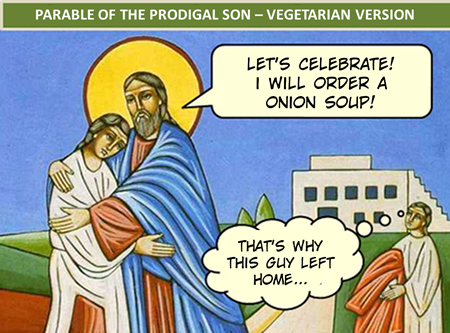 St. Francis of Assisi, who loved animals so much, ate meat. He ate little, it is true, because he was a man of austere life, and not because he believed that feeding on the meat of these creatures was wrong.

Even the Buddhist leader Dalai Lama, who once claimed – out of pure bluster – that he saw no reason to kill and eat animals because “man can live without meat”, now says that he eats meat every now and then, for reasons of health and convenience.

So, if you’re a vegetarian, fine. And if it is an option motivated by the desire to practice asceticism, even better. What has nothing to do is to use the name of Jesus or the saints in vain to criticize and harass meat-eaters. And finally, the most important: when someone rejects a piece of your delicious tofu burger, please don’t insist!

In this article:Bible, Kosher, veganism, vegetarianism